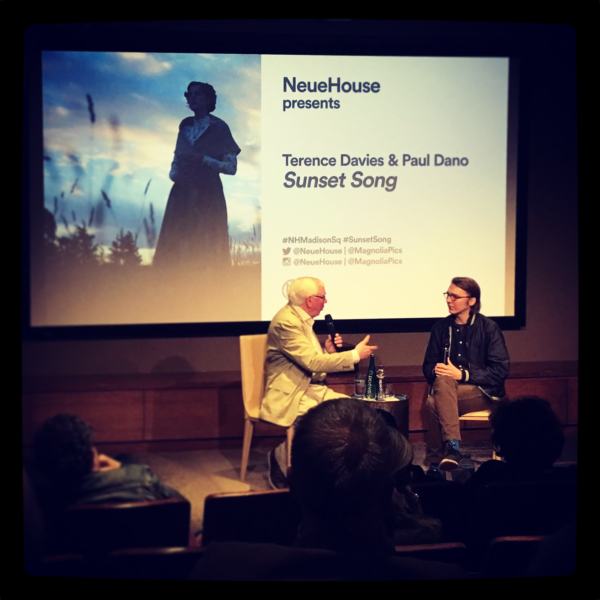 Actor Paul Dano and director Terence Davies discuss “Sunset Song” following a screening of the film in New York City on May 12, 2016.

1. Terence Davies is a Master, and “Sunset Song” is a Passion Project

Quite simply, Terence Davies is one of our greatest living directors. His body of work is built on exquisite poetic realism that transcends some rather grim, earthbound realities. Davies, raised a Catholic, identifies as an atheist; still, his cinema is imbued with a certain spiritualism that is powerful and rewarding for viewers who come with hearts, minds and eyes open.

“Sunset Song” is an adaptation of a 1932 novel by Lewis Grassic Gibbon of the same name. Davies has long loved the book, and has spent a considerable amount of time (more than a decade) and energy attempting to bring the story to screen. It’s not an easy novel, and he’s done a masterful job distilling its narrative for the cinema with a film that’s as personal as it is epic.

Equally moving both narratively and visually, “Sunset Song” is one of the most beautiful films I’ve seen a long time. The cinematography alone is, quite simply, stunning. Davies and cinematographer Michael McDonough (whose credits include recent films like “Winter’s Bone,” “Albert Nobbs” and television work like “Downton Abbey”) chose to shoot exteriors on large-format 65mm film. Much was made earlier this year about Quentin Tarantino’s use of large-format film for “The Hateful Eight.” The exterior landscape shots of “Sunset Song” rival or even best those images, all of which are jaw-dropping. This film needs to be seen on the big screen.

Equally impressive are the digitally-shot interiors of “Sunset Song,” no less gorgeous in their own lived-in way.

A former model turned actress, Agyness Deyn was chosen by Davies through the audition process, at which Davies says he just knew she was perfect for the lead, just her second such role. Deyn delivers a remarkable, deeply felt and transformative turn in a coming-of-age epic that’s at once sweeping and intensely intimate.

BONUS note: I was fortunate to see a preview screening of the film in New York, at which actor Paul Dano hosted a conversation with Davies. Dano wanted to do the Q&A simply because he’s a fan of Davies’ work. At both this screening and a screening of earlier Davies masterpiece “As the Long Day Closes” at the Museum of the Moving Image, it was quite simply a joy to hear Davies speak. He is full of passion and lyricism, just as his films are. We are lucky to have his voice and cinema.